Well after months of deliberation, routing, re-routing and laptop crashes I just made the deadline for submitting my Route Sheets for the TGO 2014.

As a TGO newbie I think I badly underestimated the number of evenings I thought I’d need to get the pre-planning done. I mean, how hard could it be I thought. I get the train up to some place on the west coast of Scotland, turn to face roughly east and then put one foot after another for about 200 miles until the land runs out and your feet get a briny wash.

Yeah right !   So that would be why I’m now the proud owner of a 1 :250 000 OS Routemaster map of Scotland with so many potential routes scrawled over it in  highlighter that it wouldn’t look out of place hanging in the Tate Modern. If nothing else I now have enough route ideas to last a few future entries. And I have to admit, planning is a lot of fun, dare I say even addictive.

Anyhow here’s my final choice. And yes, after all the deliberation, there’s nothing particularly novel about the route. 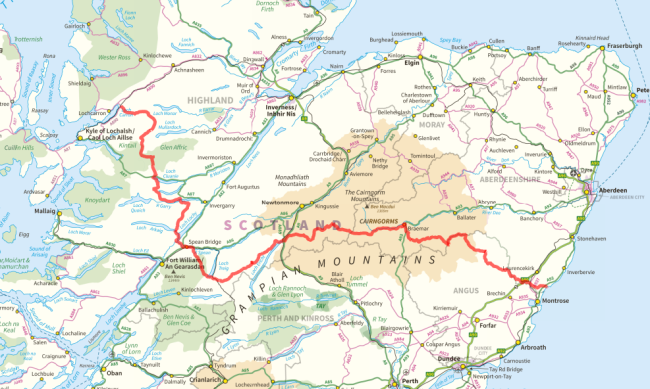 I decided early on not to bite off too much on this first crossing and so dreams for a long string of munro’s was the first to bite the dust.  And as self confessed ‘Road Runner’ (meep meep !) I’m deliberately not taking a straight line across. It’s the only way to stop me looking at the horizon and seeing how quickly I can get there.

Hopefully it all gives a bit of variety with the first section to Spean Bridge running against the grain, a mid section sneaking through the passes, and a final section from Braemar over at least a couple of tops. Next year my only aim will be to find a route that isn’t magnetically drawn towards Tarfside.

All that I need to do now is sort out which kit to take from Aladdin’s Cave in the spare room. That shouldn’t strain the grey cells too much should it, I mean, I’ve only been doing this for 35 years.