I can always rely on my wife to ask a question for which I don’t have a ready made sensible answer, even though I know that’s all she wants. 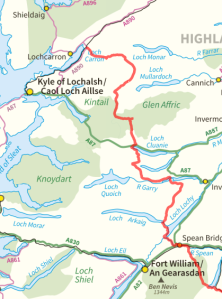 The first 4 days of my route.

Recently she’s been asking why I appear to be heading south for four days at the start of my TGO route when the east coast of Scotland lies…well, in the east ? Am I just being difficult as usual ?

So for the sake of completeness I’d probably better explain, but bear in mind that she didn’t buy this  reason either. Especially as my pathetic attempt at an answer started with ‘Well it all started 30 years ago…’

If you’ve read my ‘About me’ page then you’ll know that one summer almost 30 years ago, at the spritely age of 18, I backpacked solo from Lands End to John O’Groats. I’d daftly announced this life intention to a friend 2 years earlier, and thereafter teenage pride meant there’d been no backing down.

It took me almost 12 months to plan my intricate route, linking as many of the National Trails as possible with sneaky link paths such as the Cestrian Link Walk. But when it came to Scotland north of Fort William I had to go it alone. 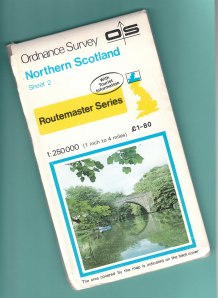 I planned a route up the West side towards Cape Wrath, intending then to trek across Sutherland to John O’Groats, and the outline route was drawn out on an old OS Routemaster map of Northern Scotland. I still have that map.

Most of my trek north that summer enjoyed glorious sunshine right up as far as the Scottish Borders. In fact the tops of my ears blistered badly on the first two days in Cornwall from the scorching sun. They made me look ridiculous for the next two months, two pink strips atop a pair of well bronzed ears.

But almost from the first foot into Scotland it rained. Then it rained some more, and some more. In fact it didn’t seem to stop raining at all. Bucket loads of it.

By the time I reached the end of the West Highland Way and trudged a pair of sore wrinkled feet into Fort William I’d had enough of it. So I got out that Routemaster map and drew a new line on it, along the Caledonian Canal and up the east coast away from the clouds.

Well my LEJOG walk was completed, life went on, and the original route up the west never got walked. Over the years bits of it got bitten off as I’ve walked ‘North to the Cape’ and the ‘Sutherland Trail’, but it wasn’t until I pulled out that old map to plan my TGO route for this year that I realised there was still one part of it I hadn’t done, and that itch just had to be scratched.