The Limestone Lion of Yorkshire – a two day prowl

There can’t be many 2 day treks that manage to pack so many iconic Dales features into such a compact little route as the Yorkshire Limestone Lion, so when I was looking for a 2 day trek to check my gear choices for this year’s TGO Challenge it was an easy choice.

It wasn’t however the quickest of choices. I picked up the little guide booklet for this walk almost 30 years ago at the Pen-y-Ghent café in Horton in Ribblesdale and its sat on my bookshelf ever since, waiting for me to realise what a little gem of a walk it is. As it turns out it’s a little cracker. 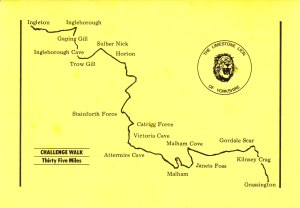 Originally developed as an alternative challenge walk to the perennial favourite the Three Peaks, the Limestone Lion instead runs a linear 35 miles (56 km) from Ingleton to Grassington by way of three of the Dales biggest limestone features, three of its biggest caves, numerous waterfalls, and 6 villages each with a pub ready to serve you a pint of quality ale (if you’ve read my other posts you’ll realise that I try to ensure real ale features prominently in my walks). In fact it’s the perfect length for a decent 2 day overnight backpack with a few ways you can break that mileage down.

So with a day’s holiday left to take before my employer graciously deleted it, I decided this would be my first over-nighter of the year. I packed roughly what I think I’ll be taking on the TGO, and took the risk that this could be the one warm night in March which would justify taking a summer weight sleeping bag. School boy error;  Cue shivering!

It’s a short drive from home for me, parking up just out of Skipton town centre to avoid the potential £11 overnight parking fee, then a quick dash to Greggs for a cup of churtle and a sausage butty before jumping on a Dale’s bus to Settle. After a perfect connection to another little Dale’s bus I jumped off in Ingleton before 10 am….into the pouring rain. I don’t make a habit of checking the weather forecast before travelling to a walk in case it turns me into a whimpering couch potato; I prefer to just alter the route on the day once I’m at the point of no return. Anyway, it was only a bit of Yorkshire drizzle. Wet weather gear – check.

An easy track up Ingleborough from Ingleton

Somewhere up in all that is Ingleborough

Time to get the compass out.

The first task of the walk takes you up out of Ingleton to the top of Ingleborough, from the quiet side away from the Three Peaks conga. On this occasion however it could have been almost anywhere. The three and a half miles gentle uphill wheeze (legs – check) delivered me into the mist and onto a summit so clagged in fog that I’m sure I could hear voices, but never actually saw anybody else. Quite eerie. It wasn’t a place to hang around either with a biting wind turning rain into sleet so a hasty bit of compass work (micro navigation skills – check) got me down out of the worst of the wind on a track down to Gaping Gill and onwards to Ingleborough Cave via Trow Gill.

I’d originally hoped to be down in Horton in Ribblesdale for a pint mug of tea at the Pen-y-Ghent café by lunch, but it looked like the previous few days rain had breathed new life into the winter mud as the long decent down past Sulber Nick had created perfect conditions for re-wilding hippo’s. This wasn’t really helped by the inability of my boots to shed mud from their soles. I’d recommend adding the following to the technical spec for these boots, ‘Attract mud like a hippie at Woodstock’. More about those boots later, a continuing tale of woe.

So it was that a rather more tired and dirty body than expected,  walked into Horton in Ribblesdale a little later than expected, only to find the café shut ! Wholly unexpected! Obviously I’d been hearing things on top of Ingleborough as the area was so deserted that they’d decided to close for the day. Fair to them they did open a window and offer to open up if I needed sustenance, but I didn’t have the heart to have them go to all that trouble just for a mug of Yorkshire tea. Instead of which I just trudged off sobbing gently into my map case and ate my lunch with some ducks by the village primary school. Hankies – check. 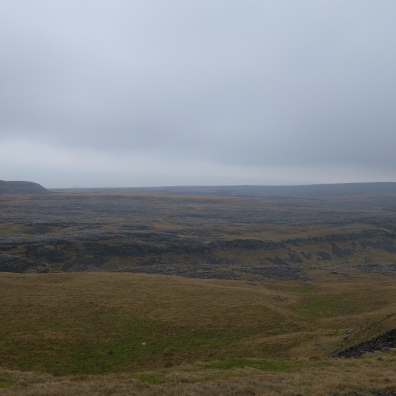 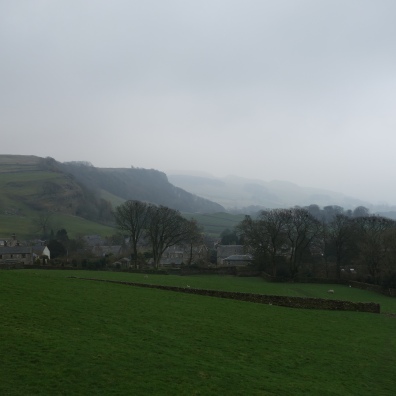 Stainforth, and a pint at the Craven Heifer.

I knew that weather wise the first day had promised to be the worst of the two, but hadn’t banked on a head wind making it heavy going for most of day. In fact with that and the rain it was turning out to be a pretty tiring and chilly walk. But sustenance can sometimes arrive just when it’s needed most, as it did at the Craven Heifer in Stainforth village at the end of the next few miles leg.

After a few of pints by an open fire roaring like a blast furnace, the wind had ceased and my energy had recovered…or was that the anaesthetic qualities of Thwaites Wainwright? Either way I didn’t feel one step of the last leg via Catrigg Foss, though I do remember wondering if I’d feel anything at all if I fell over the edge trying to take an artistic photo of the waterfall by dangling over the edge from a branch . Neither in fact happened; I am still here to tell the tale, and the photo was an embarrassing amateur flop (hence lack of public viewing here).

By now it was getting on past 6 pm so with only an hour of decent light left I marched on to Attermire Scar to find a spot to camp for the night, pausing to fill up with water from an old stone trough on the way. I’d pretty much decided to slice the route down the middle with days of 18 and 17 miles and Attermire Scar and Victoria Cave fall nicely at that half way mark, and as it turned out there were plenty of options for a pitch amongst the odd rabbit hole. I ended up bedding down for the night in a nice elevated spot, if a little breezy. 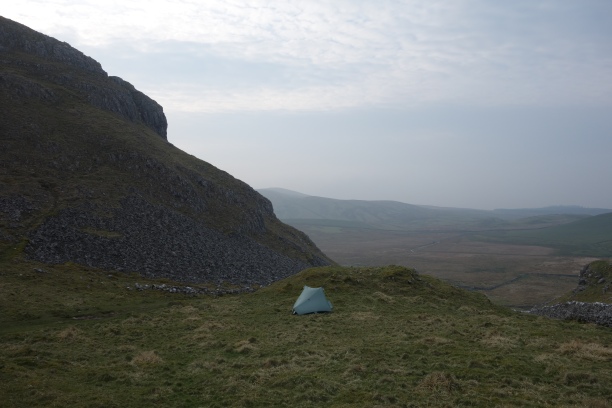 A breezy camp at Attermire Scar

I took my Tarp Tent Notch with me on this occasion, still undecided whether it’s going to be the right choice for the TGO. And I have to say that after this trip I’m still undecided. Don’t get me wrong, it’s a fantastic light little tent with more than a nod back to the wedge tents of the 70’s, and set’s up in a flash. But it’s just that bit short of wriggle room inside, and like many silnylon tents it relaxes quite a bit after first setting up. I’ll be honest, after a bite to eat, mug of tea and listening to Friday Night is Music Night** I was well on the way to the land of winkin, blinkin and nod, and didn’t have the gumption to extract myself from my bed and tighten everything back up. So what with nylon flapping like a haddock, and the school boy error that was my sleeping bag, it all made for a chilly and restless night’s sleep.

Day two started as the first had finished, chilly and windy. But after little sleep there wasn’t the usual reluctance to get packed up and warm up. The sun in fact began to burn through the morning mist pretty quickly as I set off and climbed gently over towards Malham, and by the time I started down the grass flanks of Pikedaw Hill towards the village it was looking like the day ahead would more than make up for the previous ones drizzle and clag. And in complete contrast to the previous days tea oasis, by 10 am I was sat outside the Old Barn Café in Malham happily wolfing down a pot of Yorkshire and a hot scone delivered straight from the oven. Food doesn’t come much better than this. 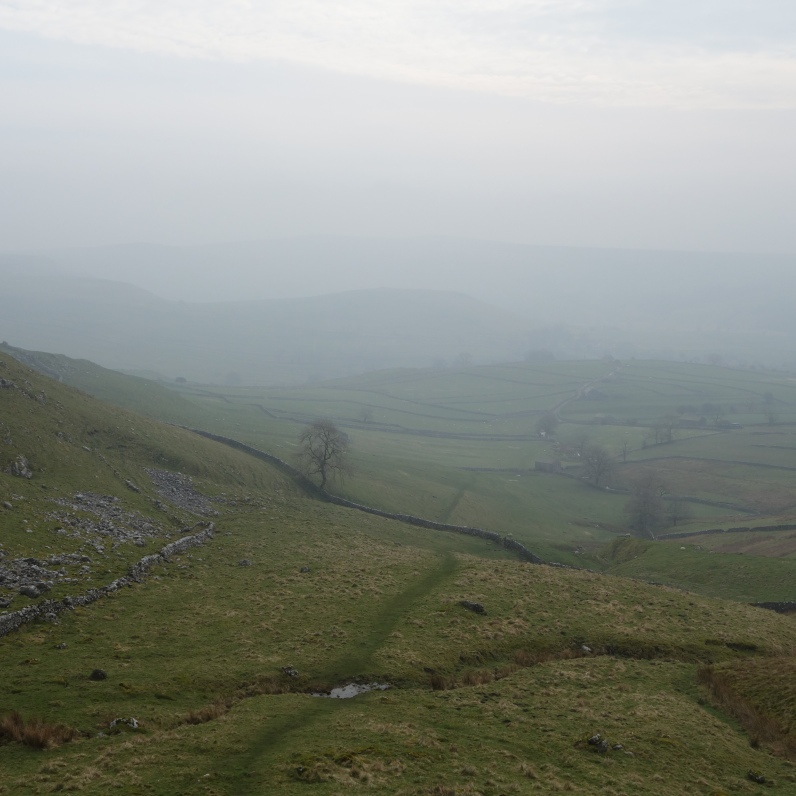 Descending from Pikedaw Hill toward Malham 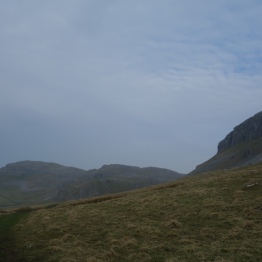 Looking back to Attermire Scar 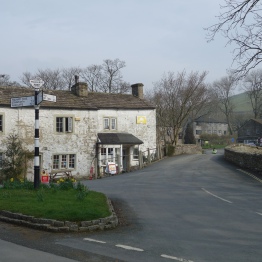 Malham, and time for tea and scones.

The second half of the Limestone Lion then continues with Dales highlights coming thick and fast, up and around Malham Cove, dropping back down to pass close to the waterfall at Janet’s Foss, and then on through Gordale Scar an onwards towards Malham Tarn. 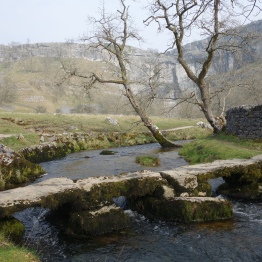 The classic limestone pavement on top of the cove.

Thankfully the previous few days’ rain hadn’t been so heavy as to cause the river to burst over the clear rock up the centre of the Gordale Scar falls, and so allowed me to scramble up without getting wet or forcing a lengthy detour. There’s something really quite satisfying about scrambling up some rock with a full backpack, it defies all sensibility. Especially when you have a good audience of tourist spectators who’ve been standing looking at it for an age thinking today really isn’t the day for being foolhardy, but then follow like sheep once they realise how easy it is.

A little scramble up the middle.

A lovely gentle walk along a limestone fringed grass plateau then takes you to within a breath of Malham Tarn. And from here there’s then a superb 5 mile stretch along the old Mastiles Lane drovers road all the way to Kilnsey, a track that’s been in use since before Roman times and just rolls majestically over the hills into the distance.

…along the Limestone Lion…

Above Gordale Scar towards Malham Tarn

Not a result of the short scramble !

Something that didn’t roll quite so majestically was me exiting the Craven Arms in Kilnsey a couple of hours later carrying a pint of Mary Jane and a packet of itchy pigs. I decided to mix the photo opportunity of Kilnsey Crag with the delights of the beer garden, one being perfectly visible from the other. I also made a mental note to go back to the Craven Arms sometime and attempt their Ploughman’s lunch after seeing a couple on the next table being served something on a wooden platter that would have satisfied a ravenous coach party. 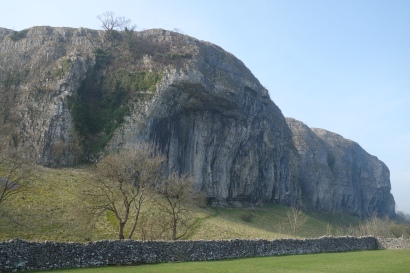 After enjoying a couple of pints and letting the soles of my feet recover from the march along Mastiles Lane, all that remained to do was walk the last 4 miles from Kilnsey Crag to the final watering holes in Grassington and complete the full 35 mile route. And with sun now banishing almost every cloud in the sky the last few miles linking up with the Dales Way were a really gentle and pleasant wind down to what had been a cracking little route.

Leaving Coniston for one last gentle climb over to Grassington 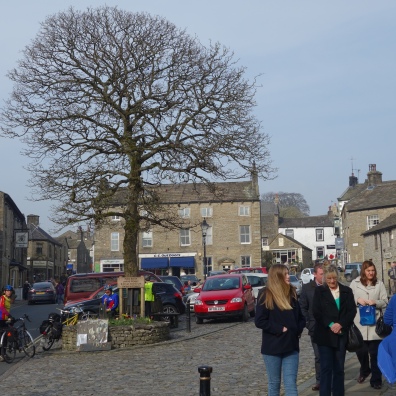 Grassington – Journeys end and ample scope for one last pint.

I really can’t recommend this route enough for anybody who wants a taste of the wonderful backpacking the Dales has to offer. And even if you’ve seen all these Limestone features many times before, it makes a worthy 2 day trek linking them together.

Public transport to and from Skipton also makes either end easily accessible without having to add in travel days. For me, after a final pint amongst the Saturday crowds in Grassington, it simply meant a quick bus journey back to Skipton to pick up the car and back home in time for tea.

** It’s one of life’s little mysteries why we’ll eat things, and in my case listen to things, that we wouldn’t even entertain the thought of in the comfort of home. The outdoors plays havoc with your taste in both food and music.