TGO Challenge 2014 – Preamble : Musings from a challenger in rehab

I’ve been back home now for a week since completing the TGO, a week which has seen me clear the house completely of every last scrap of food in an effort to fend of what can only be described as an unnaturally large appetite. I’ve been shovelling calories down my throat faster than Sainsbury’s can home deliver it. All sorts of junk has been devoured and yet here’s the curious thing; I didn’t lose an ounce on the walk and I never felt hungry! So why the sudden hunger now?

A strange thing seems to happen on long backpacking trips…after several days, once my mind starts to switch off from the normal irritations and pains of life, my body starts to follow suit.

Peperami and Primula on oat cakes start to taste like three star Michelin food. Five day old unwashed armpits start to smell, well, quite acceptable. Sitting under a tarp in the cold and rain starts to feel luxuriously comfortable compared to being the other side of that thin sheet of silnylon. Who needs a living room, a blazing fireplace and a roast dinner when you can be as toasty, dry and well feasted as this?

After 8 days without a bath, I decided to sit down-wind so nobody would notice.

Such feelings are unfortunately short lived, and your body just seems to know when it’s safe to drop the big charade and fall apart.  No sooner have you reached the end of your walk than it’s cue aches, pains, hunger, and that bloody heavy rucksack that’s suddenly appeared on your back. I witnessed this phenomena in full swing at St Cyrus as Challengers skipped full of the joys of spring down to the beach, only to reappear minutes later limping to the bus stop like Quasimodo.

And so as this week has passed I’ve been forced to face up to a few things on this year’s TGO which in the cold light of a normal day I would not naturally do, and some of which bring shame to my good name. Indeed the painful realisation of some of my behaviour has forced me to enter a period of rehab.

Of course the signs were all there in Braemer, where I sank to a new personal low in alcohol consumption.

Having already polished off a half bottle of Bunnahabhain 12 year old Islay Single Malt in the first few days of the trek, I was desperate for more. Not that I was alone in this predicament as I’d happened on another Fellbound challenger (who shall remain nameless) who didn’t even appear to care whether he got hold of a decent malt or a counterfeit blend. He just craved whisky.

So I can only apologise to the residents of Braemar who had the miss pleasure of witnessing what can only be described as two unwashed and weary vagabonds, standing on the pavement outside the off license drinking cheap whisky from the bottle……..at breakfast time.  In fact we were so desperate to empty the entire contents of a bottle that some was spilt on the pavement. To round off this sorry episode, my compatriot then re-entered the off license with the empty bottle, presumably to ask if there was a refund, only to have the shop owner exclaim ‘There’s a drop left in that bottle!’ and promptly removed the cap and swigged it himself !

In my defence I should state that as a TGO virgin lacking the willpower of a seasoned veteran, I’m open to being led astray. The first challenger I met on the train travelling up to my start at Strathcarron was a certain Mr Pidgeon, who introduced himself by way of an Iron Brew bottle of whisky, and proceeded to show me how to use my waterproof phone case as a pee bottle.

A sinner from the start

I’d decided to start my first TGOC from Strathcarron for a simple reason; you can head straight out into the wilds from there with no messing about. So it came as a bit of a shock at breakfast on the first day (with a thick head) to find that the tide had gone out and the start had moved a mile down the road in the wrong direction, the direction I wasn’t heading.

After prolonged discussion over breakfast residents of the Strathcarron Hotel split into two distinct factions. Those with the conviction that a purists start had to involve getting your feet in the briny stuff first, and those who responded ‘b****r that’.

Leaving packing until later, myself and two other lone purists set off down the road to find evidence of seaweed, and ensure that our trek wouldn’t result in sleepless nights. So you can imagine how mortified I now feel after walking 230 miles across Scotland only to be quizzed at St Cyrus ‘You did carry your rucksack down to the shore with you at the start didn’t you?’.

It rather begs the question, what is a purists TGO crossing ? What does ‘unsupported’ mean in pure terms? Does this exclude the use of B&B’s for example, or is this simply referring to the banned use of a jockstrap on the TGO? Would an unsupported crossing exclude the use of resupply shops or the wearing of man-made fibres? Should a purist walk coast to coast naked as the day you were born, only eating what you can forage along the way? B****r that, pass me the Fuizion Foods Coq au vin will you.

Hello. My name is John, and I am a walkaholic

Having realised this week that I now need to seek help for a hard liquor problem I didn’t know I had, and seek redemption for an impure start, it came as bittersweet that some of the rehab clinics are offering a ‘buy two, get one free’ offer. So I asked whether I could throw a fledgling addiction to the TGO into the mix.

The response was not positive.  It appears that there is no known cure for this and that society simply has to accept such unfortunates as myself. Indeed Scotland appears to be some sort of equivalent to the legalised cannabis cafes in Amsterdam, a place where backpacking addicts can wander freely and enjoy their guilty pleasure without fear of rebuke. 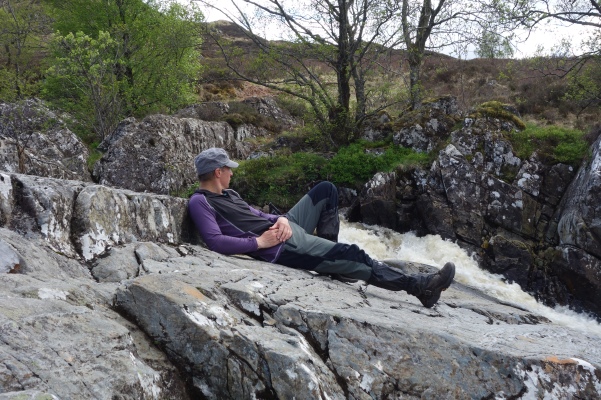 As you can probably tell from all of the above drivel, I’m not attempting to write a day by day account of my crossing as it was all a bit of a technicolor blur. So I’ll be following this with a few posts about the whole experience in general and weave photos into those.

It’s all part of my therapy you know.

16 thoughts on “TGO Challenge 2014 – Preamble : Musings from a challenger in rehab”