Entering for the TGO Challenge last year was, of course, meant to be a one off. If only life were so simple, the best laid plans of mice and men and all that.

So here at the start of 2015 I find myself reflecting briefly on last years crossing as I plan to do it all again in 2015.

I’m not one for repeating life experiences (Pennine Way excepted), and the TGO Challenge was intended to simply be a tick in the box. Done it, now move on. But the experience hits you with an unexpected dimension, the people you meet and the connections that last well beyond the Park Hotel in Montrose.

So when the call came for applications for the 2015 Challenge I can’t say that it was much of a struggle to decide to do it all again. Go on then, just one more.

When I left Montrose after the event last year I can’t say that I gave much thought to what I might have done differently, it didn’t matter. I wasn’t going to do it again and the whole thing had been a blast anyway. But faced with planning for a second crossing I did dig out my route and kit list and reflect on what worked and what didn’t. 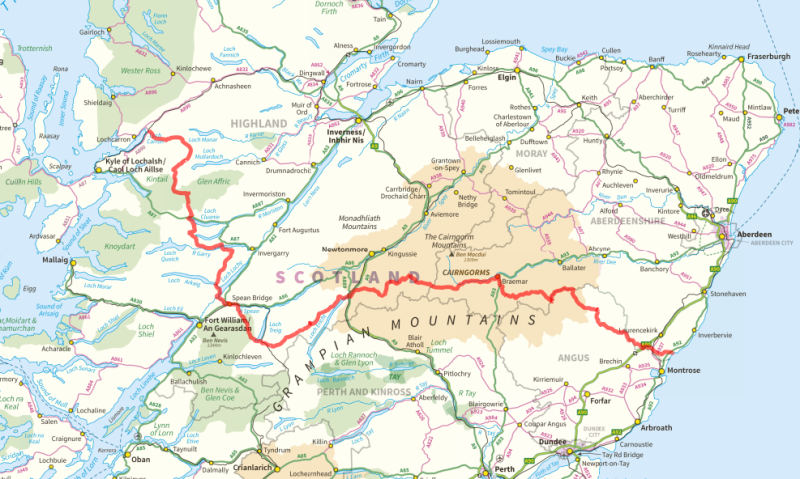 As a first timer I took the sound advise of keeping things simple and well within my capabilities. The route stuck mostly to the Glens and passes with only minor excursions onto the tops (1 munro, 1 corbett). In fact the total altitude gain was a mere 9,236 m.

It did quite a sweep south in order to prolong the time I spent in the west, but also to tick off a route I’d had pencilled on an old map for almost 30 years. It was a good decision, I enjoyed the scenery in the first half as far as Dalwhinnie more than the latter half. I also seemed to cut across everybody else’s route during that first week which meant I was never following other challengers. The route had almost no tarmac until Tarfside.

The west was extremely wet underfoot (no surprises there), and true to the vetter’s comments it did appear I’d chosen to cross a fair few flood plains and watersheds, mostly during the first three days.

Distance wise I did 342 km (212 miles) in a little under 12 and a half days. That was a full 2 and a half days ahead of my plan, at an average of 28.5 km/day during full walking days. I found the distance no problem at all. I had 4 FWA’s planned and used 2 of them, mainly due to being sociable rather than the weather..

Of my 11 nights under canvas, 6 were wild camps and 5 were either on camp sites or lawns (Dalwhinnie and Mar Lodge). Best wildcamps were above Glen Garry Forest and besides Loch Ossian.

As a first route I don’t think I’d have changed much if anything at all. I really enjoyed meandering across rather than taking a beeline east. For a second crossing I’ll plan to go high more often however as I missed those differing perspectives and views on the first crossing. I’ll also push myself and increase the altitude gain.

The Not So Good

I sent two resupply parcels ahead, to Spean Bridge and Braemar, with about 3-4 days supply in each. This was overkill in know, especially for the second parcel as I could have picked up supplies in Braemar and as it turned out I was also able to grab an evening meal at Mar Lodge and Tarfside.

I was lucky at Spean Bridge. I’d not bothered to phone ahead to the PO and ask if they accepted Poste Restante, and as it turned out they didn’t (claimed they had no room for storing parcels). In fact they were going to post it straight back, but I’d not printed a return address on the package so they had to keep it. Lucky.

Lesson – Check with the PO before you send Poste Restante

I’d planned to pick up a new cartridge at Spean Bridge knowing that I was unlikely to find one in Dalwhinnie and didn’t know how long that first one would last. There were none for sale in Spean Bridge, but luckily a challenger dropping out there gratefully passed his over. As it turned out that first 250 size canister didn’t actually run out until Tarfside so I could have picked up a replacement as late as Braemar. I’d carried a spare unnecessarily for almost a week.

So there we have it. A couple of things I’d change completely, the odd tweak here and there, and I think I could easily shave 1kg off last years weight carried with no impact on comfort. And that 1 kg will make all the difference this year as my route will go higher and be more challenging.